The Yorkshire Regional Brass Band Championships took place at Huddersfield Town Hall over the weekend of 7th and 8th March, with the band taking to the stage on the Saturday afternoon to compete in the First Section.

The First Section set work was ‘Legacy’ composed by Tom Davoren as a celebration of Aneurin Bevan and the 70th anniversary of the creation of the NHS. (Full description available from Tom Davoren’s website). Many weeks of preparation would come down to a performance of around 12 minutes in Huddersfield against another 9 bands providing a high standard of competition. The intricately layered nature of the piece meant that there were plenty of pit falls for bands to drop into, particularly if they underestimated the complexity, and with only 5 points separating the promotion and relegation spots in the Yorkshire 1st Section, any mistakes could prove costly.

Drawn 8 out of 10, the band would have to wait a couple more hours after the contest started before taking to the stage. Although the band was looking to redeem our Butlins result, our warm up and registration were relaxed affairs. There was an undercurrent of excitement as the band took to the stage, having received positive feedback at our Preview Night the previous weekend, and worked on our MD’s ‘post-it’ notes all week, we were confident that we were capable of a great performance of the piece.

When the band left the stage, we were cautious (based on previous results) but still hopeful of a good placing.

Both our adjudicators praised the bands efforts in our remarks:

“Music flows. So well shaped. Percussion enhances the performance throughout. This is so good”.

“Lots of detail is clear. Music has life”

“Band accomp is secure and sonorous. S Cor has pleasing tone and a singing style to suit the music. Bravo all band feeling emotive and singing very well. Lovely musical personality shining through”.

With representatives from all bands on the stage, the hall was packed for the results. The Youngest Player award went to Lucas from Lindley Band aged 12, Best Soprano Cornet to Claire Jenkins from South Yorkshire Police Band and Best Euphonium to Elizabeth Wood from Knottingley Silver Band. The Soloist Prize was awarded to the principal cornet of the band drawn..…..number 8!  Us! Our principal cornet player Greg Timmins scooped the soloist prize! Everyone at the band is thrilled Greg’s performance was recognised by the adjudicators, and we congratulate him on his well-deserved prize after a brilliant performance.

By this point, the band had moved on from feeling cautious to feeling confident that we had made an impression and could feature in the overall prizes….and we were not disappointed.

Unite the Union Brass Band were crowned Yorkshire Regional 1st Section Champions for 2020, and along with 2nd place Knottingley Silver Band, received an invitation to represent Yorkshire at the National Finals at Cheltenham in September. 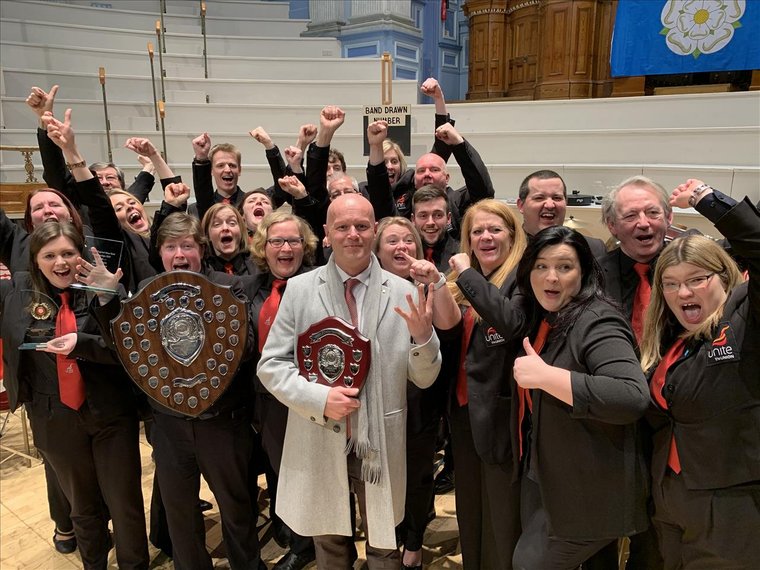 Our Musical Director, John Davis also received the Graham O’Connor Trophy as the winning conductor, a moment that was made all the more special as the Graham and John had become friends following Graham praising John’s skills as an MD in 1991. The two had remained friends until Graham’s death in 2013. Graham O’Connor was also a previous MD of the band in 1980, and 94-95, leading them to victories in the Grand Shield 1980, Yorkshire 2nd Section 1980, and the Yorkshire 1st Section Area 1995 to name a few.

After many weeks, the hard work of both the band and our MD John, paid off and the band are ecstatic to have won the Yorkshire 1st Section 2020. We would like to thank John for all his efforts in preparing the band for the contest, including giving up many of his weekends for sectionals, and to all members of the band for the work they put in to achieving this result. Congratulations must again go to our principal cornet player, Greg Timmins, for winning the soloist prize for his performance – fantastic playing!

We would also like to congratulate to our fellow National Finals qualifiers Knottingley Silver Band, and also the winning instrumentalists, Claire Jenkins (soprano) and Elizabeth Wood (euphonium).

As an added bonus to winning the contest, we have also secured promotion back to the Championship Section for 2021.

This contest result and subsequent promotion is a brilliant achievement for the band, and we hope to continue our success at the Spring Festival in May, and again at the National Finals in September.